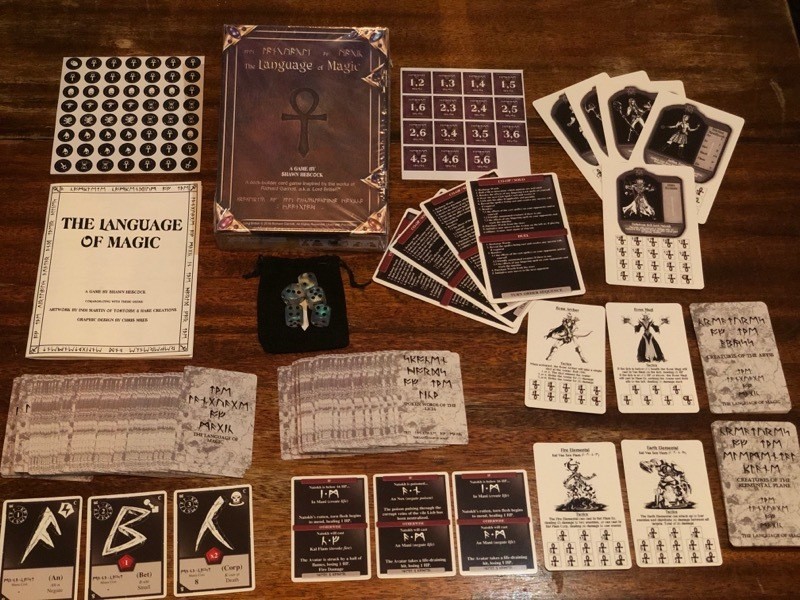 The Language of Magic Card Game - Funded on Kickstarter!

Originally funded on Kickstarter! The Language of Magic by Shawn Michael Hescock — Kickstarter

The Language of Magic is a deck-building card game for 1 to 4 players inspired by the works of Richard Garriott.

The Language of Magic is a deck-building card game which can be played in two ways: 2-player duel – players attempt to build an arsenal of powerful Words of Magic to overcome their opponent, or 2-4 player cooperative or solitary play – players work together to battle the Lich and its minions, defeating it before it can cast its final spell. As a solo or co-op player, you take on the role of the Avatar, chosen heroes of spirituality...who are to do battle with the Master of Hythloth, the vile Nefarious Lord Zorhkar and his minions of the abyss.

There are 26 words of power, each representing their own idea. These words can be combined to make powerful spells to harm, mend, protect, or alter the creatures and the world around you. Some words, the incantations, direct the polarity of the spell. Will you create, negate, or steal? Other words add elemental powers, some can add to or multiply the effect. There are so many possible spells, you will need to play it for yourself to see what you can come up with.

The rules are currently only hosted online and can be found here: https://www.geekscollab.com/the-language-of-magic-rules-and-overview.html

From the Creator, Shawn Michael Hescock:
The Language of Magic came about from my long-time appreciation for the world which Richard Garriott created. Specifically the MMO, Ultima Online. As a kid, teenager, and young adult I put many hours into the game and, even though it has been running for just over 20 years, I still go back to it from time to time just to relive the experience. It is a masterpiece of a game that will never get old and my only hope is that we created something that pays the proper respect.

Save this product for later
Display prices in: USD